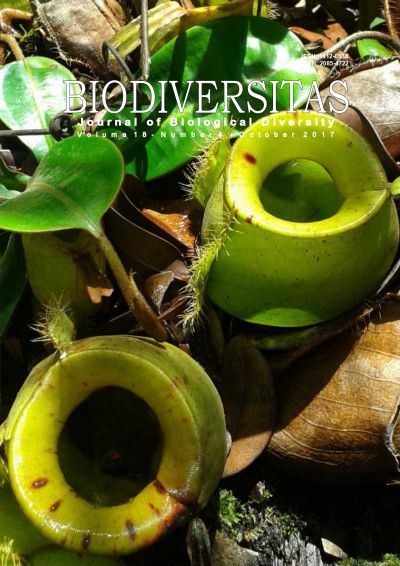 Lestari D, Asih NPS. 2017. Population structure, distribution pattern and microhabitat characteristics of Aglaonema simplex in Pasatan Protected Forest, Jembrana, Bali, Indonesia. Biodiversitas 18: 1663-1668. Aglaonema simplex Blume is one species of Aglaonema that is distributed in Bali, Indonesia. This species can be found in the forests of Jembrana, Karangasem, Tabanan, Buleleng and Bangli. There is no recent data for A. simplexâ€™s population and microhabitat in Bali, while this data is needed to develop future conservation policy. By tracking populations over time, ecologists can see how these populations have changed and may be able to predict how they are likely to change in the future. Monitoring the size and structure of populations can also help ecologists to manage populations. This study was aimed to determine the current condition of A. simplex in the Pasatan forest and to find out the population structure, distribution, and its microhabitat characteristics. The study was conducted along two tracks at Pasatan Forest, Bali on June 9- 11, 2015. Data were collected using the purposive quadrant plot method and analyzed descriptively, tabulated in tables and graphs. The population pattern distribution was as defined by standardized Morisita's index and microhabitat differences in both tracks were determined by the Mann-Whitney test in SPSS 16. The total number of A. simplex was 114 individuals. Thirty-seven percent of plants were juveniles, while 36% were mature plants without fruit and 27% were mature plants with fruit. The population structure along the first track was dominated by a mature population of plants without fruit, while fruiting mature plants dominated the structure of the population along the second track. The distribution of the population along the first track was clustered, while distribution along the second track was uniform. A. simplex was found at an altitude of 367- 448 m asl., oil pH of 6.7-6.8, soil humidity of 73%-84%, air temperature 27Â°-28Â° C, air humidity at 80%-86%, with low light intensity of 170-225 lux.